The following article was published in the Tucson Citizen

The face of FAS

Fetal alcohol syndrome can leave babies with brain damage that later can cause tragic bursts of rage. 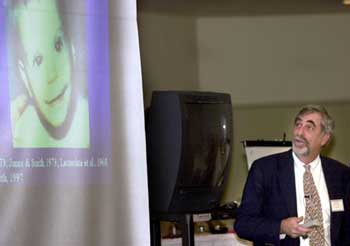 Edward Riley, a San Diego State University scientist, projects what he calls the "Face of FAS," a child with all the facial characteristics of fetal alcohol syndrome, during a seminar on FAS at the Sheraton Four Points Hotel.
FRANCISCO MEDINA/Tucson Citizen


He scribbled notes and listened intently, searching for scientific facts that would help him understand why his adopted son killed his beloved wife.


Andrew McMullen saw photos of shriveled, underdeveloped brains and heard that the disorder his 15-year-old son, Jonathan, is said to have - fetal alcohol syndrome - can cause tremendous behavioral problems.


"I'm trying to figure out this stuff for myself," McMullen, 55, said at a Tucson conference on fetal alcohol syndrome last week. "We had suspected it (prenatal exposure to alcohol) might be in his background, but we really didn't know."


The McMullens were not prepared for the problems the child would bring into the family.


FAS is the leading cause of mental retardation in Western civilization. It is caused when a woman drinks during pregnancy, and can result in a lifetime of aggression and behavioral problems.


McMullen and his wife, Kristina, 56, took Jonathan McMullen and his two brothers, Jack, 12, and Joe, 11, into their home in Elgin as foster children in 1999 after the three were about to be split up. A year later, the McMullens, a devoutly religious family, adopted the boys.


Then on Sept. 7, Jonathan McMullen, who was at his home with a 12-year-old friend, shot his adoptive parents and his brother, Jack. Andrew and Jack McMullen recovered.


The family is supportive of Jonathan McMullen, who is in jail on charges of first-degree murder and attempted murder.


"He needs to be protected from himself," said Andrew McMullen, who participated in the conference on FAS, attended by 200 people. "Prison won't help him."


McMullen listened to Edward Riley, a San Diego State University scientist who is investigating how exposure to alcohol in the womb affects behavior throughout a person's lifetime.


McMullen was later part of a panel discussion that included parents and professionals who work with people with FAS and other related disorders. 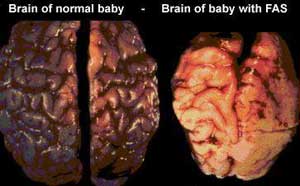 Riley shared the latest information on how alcohol can cause holes in a developing brain. It can also result in a significantly smaller brain that is missing critical pieces. He showed the audience numerous brain scans of people exposed to alcohol in the womb, and the deficiencies were tremendous.


Riley is conducting studies in Russia that he believes will help pediatricians worldwide identify children affected by alcohol in the womb.


First diagnosed in 1973, FAS is widely accepted in scientific and medical realms. Children and adults can be diagnosed fairly easily based in part on facial features.


But Riley has also devoted much of his research to lesser-known and harder to diagnose disabilities that have been called fetal alcohol effect (FAE) or prenatal exposure to alcohol (PEA).


Far greater numbers of people suffer from tremendous behavioral problems but may go undiagnosed because they do not have the telltale "face of FAS" Riley said.


"They may look normal, but they have lots of behavioral problems," Riley said.


He said the cerebellum, which affects balance and the ability to pay attention, can be severely damaged by prenatal alcohol exposure.


The permanent, irreversible brain damage can cause children and adults to repeatedly "do stupid things," he said.


In past years, people attributed behavior problems in children to their environment.


"Lots of people were saying, 'The kid's doing that because he's been in six different foster homes,' but the problem lies in the changes in the brain, and not from living in five foster homes or being abused. It happened at eight weeks (in pregnancy)."


Children exposed to alcohol in the womb are likely to end up with mental health problems, in jail or another institution, fail at school and on the job and be unable to care for themselves, according to several studies.


Riley is attempting to develop a behavioral assessment that could help diagnose children who do not have the facial features, to help them get services.


No known level of drinking in pregnancy is safe, and women should abstain, Riley repeatedly warned.


Teresa Kellerman, who adopted her son John at birth, spoke personally of the devastation drinking during pregnancy can bring.


"The person with FAS will always need an external brain," said Kellerman, who spends her days ensuring John, now an adult with FAS, does not get in trouble.


"Kids with FAS are not capable of being left on their own," Kellerman said. "They can't make good choices alone."


The Kellermans were featured in an award-winning, six-day series called "Born on the Bottle: Drunk for Life," which ran in the Tucson Citizen in 1997.


The Kellermans both know that without Teresa's constant guidance and support, John would probably end up in prison because of his impulsive behavior.


"I told him I would do whatever it takes to keep him out of jail even if it means having someone with him every minute of the day," she said.


Kellerman also reminded the audience that while the brain damage is permanent and devastating, the spirit that lives in those with FAS must be appreciated.


"The precious spirit inside these kids is whole and healthy, and I celebrate that," Kellerman said.


The conference was sponsored by the Arizona Department of Health Services and presented by FAS Arizona and FAS Community Resource Center. 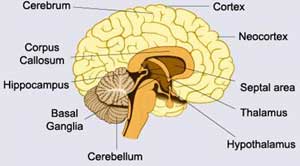 WHERE ALCOHOL AFFECTS THE BRAIN


Areas of the brain that can be damaged in utero by maternal alcohol consumption:


For more information on fetal alcohol syndrome, log on to www.fasarizona.com or call 296-9172.


The Tucson Citizen's six-part series on FAS, "Born on the Bottle: Drunk for Life," may be found at www.tucsoncitizen.com/local/archive/fas/index.html. A few copies of the reprint remain and may be obtained by calling 573-4561.